We recently celebrated Thing 3’s FIRST birthday!  Little kids and birthday parties are so much fun, although Thing 3 was slightly overwhelmed by all the attention.  He arrived like a freight train eight days before his due date.  About two weeks before, he wriggled into a frank breech position.  After researching the version procedure proposed by my doctor, I opted for a c-section and got on the hospital’s schedule.  The weekend before, Thing 3 decided he did not want to wait for that appointment.  We arrived at the hospital just in time.  Within 30 minutes of getting to the hospital, I was already 7 centimeters dilated and prepped for surgery. 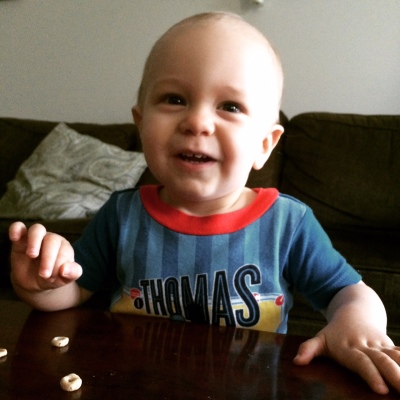 We had a low-key party with family and a few friends.  We grilled burgers and hot dogs and inhaled cupcakes.  Thing 3 played hard, but kept his stone-cold-sober party face on.  He did not want to crack a smile, but he loved his cupcake and playing with his cousin.

This baby is such a good boy!  He loves to play peek-a-boo and patty cake.  He blows kisses and greets everyone by waving when they come through the door.  He turns every small toy into a phone, holds it up to the back of his head, and asks, “Hiya?”  He gives these ridiculous open-mouth slobbery kisses.  He is becoming more opinionated and independent (and antagonistic towards his big brothers).  He is speed-demon crawler and champion cruiser…but has not started walking alone quite yet.  He looks so adorable when he cuddles with his favorite blanket.  He points at Cheerios and Goldfish when he wants his favorite snacks, although he loves all food.  He wakes up happy almost every morning and laughs at his Daddy’s funny faces.

In the same breath that I complained about snow days disrupting my World War II unit, I ditched my just-finish-the-damn-SOL plans to bring some bracketology to seventh grade.  I was inspired by “Teach with Tournaments,” which I saw in my Pinterest feed a few times, and March Madness.  I’m writing this blog post while watching Wisconsin take on Duke… Come on, Badgers!  Definitely check out Josh Hoekstra’s website and video clip.  This guy makes money telling teachers how to complete brackets.  Seriously.  Either he is a genius, or we’re that stupid.

I did some research on unsung heroes of World War II, trying to find names I (and my students) never heard before.  I found heroes from various walks of life, including soldiers, spies, pilots, Americans, Soviets, Brits, and those who publicly opposed the Nazi party in Nazi-controlled lands.  Names on our brackets included the big guns like Churchill, FDR, Eisenhower, Patton, Schindler, Von Stauffenberg, and Zaytsev; as well as lesser-known players like Mildred Manning (Army nurse/POW), Noor Inayat Khan (spy), Maximilian Kolbe and Chiune Sugihara (both tried to save Jews from concentration camps), and many others.

I pre-filled brackets for each class and printed names on strips of paper.  Each student drew a name.  They had 25 minutes to research that person and find out what he/she did during WWII that was heroic, then create a 60-second pitch to win over their classmates (and, more importantly, me) to advance to the next round.  It was interesting to see a student draw a name and look completely disappointed with their assignment.  Maybe he couldn’t pronounce the name on the sheet, or she didn’t want to speak in front of the class, but every kid fired up a Chromebook and feverishly wrote down facts.  Good facts, too.

The debates were fun.  Many kids spoke in first person, starting with “I am the greatest hero because…”  I put 60 seconds on the timer–kids dubbed it the “shot clock.”  When less-popular names advanced past the big guns, they were bracket-busters.  The phrase, “He’s a real bad astronaut,” was spoken multiple times as students advocated their advance.  Get it?  Get it?  They’re so clever.  One kid compared his soldier to Chuck Norris.  “He could just pick up a handful of bullets, throw them at the Japanese, and kill hundreds of enemy soldiers.”  A little Chuck Norris meets Hot Shots Part Deux…I was very entertained.

It took an entire block to get through the research phase and first round.  We finished the second/third rounds after reviewing for the test.  The championship round was done after the test.  They were epic.  The kids were so into the debates, and in the end, realized it was a tough decision because every person on the bracket did something extraordinary.  There was cheering, gasps, upsets, and tough losses.  Those lessons go beyond March Madness. 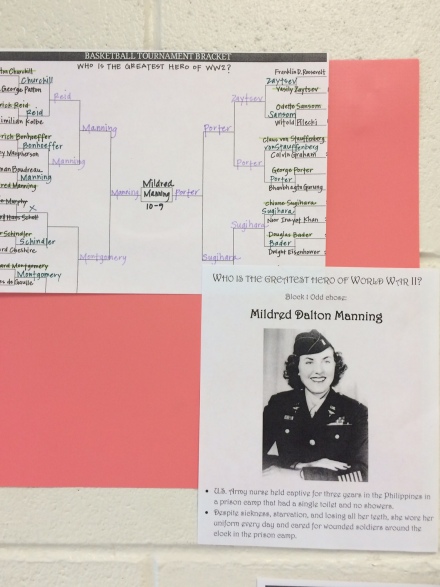 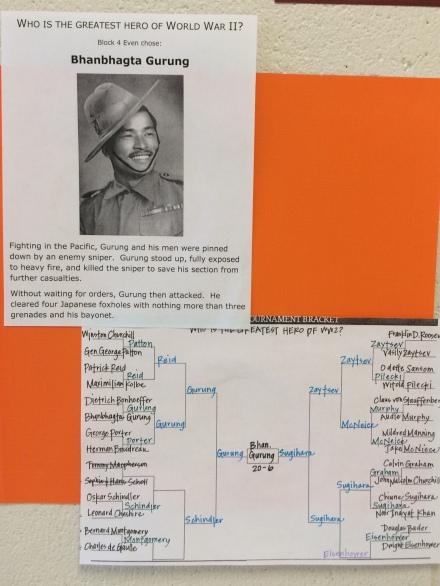 Welcome to Far Beyond Zebra--my ramblings, reviews, and recipes. I'm a daughter, sister, wife, mother, and teacher from the great Commonwealth of Virginia.

“There's no limit to how much you'll know, depending how far beyond zebra you go.” -- Dr. Seuss

The Whittacres go to Bavaria

“There's no limit to how much you'll know, depending how far beyond zebra you go.” -- Dr. Seuss

Your History. Your Heritage. Your Story.™